“So much more than QA of deformable image registration”

ImSimQA is the only dedicated and independent system for testing, validating and commissioning modern image registration and fusion software as used for adaptive re-planning, atlas-based automatic segmentation, IGRT and tumour response assessment.

Deformable image registration, DIR is now embedded in many clinical applications for adaptive radiotherapy, multi-modality planning, automatic contouring and more. ImSimQA specialises in the QA and validation of DIR algorithms used in a wide range of clinical systems, providing all the testing recommended by the TG-132 report.

ImSimQA image datasets as provided by the Task Group 132 report, are starting sample images only, to implement QA and validation of deformable image registration and registration and fusion generally. Meaningful clinical validation, however, requires ImSimQA to be installed, so that the full range of virtual phantoms, DICOM editing tools and quantitative pass/fail analysis tools can be used.

ImSimQA contains all the quantitative analysis tools recommended by TG 132 and provides an extensive, fully customisable library of digital, or virtual phantoms both geometric and anthropomorphic. Additionally, any patient or phantom image can be imported as DICOM and then edited to re-create the precise clinical scenario which will differ across a range of clinical techniques, imaging devices, and from clinic to clinic. 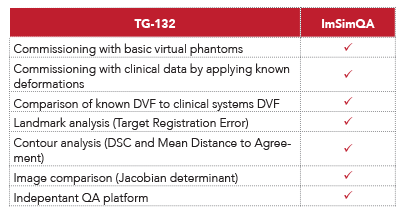 This the underlying software to which optional modules can be added. This module includes a virtual phantom library, manipulation of DICOM-3 images and the creation of new DICOM images for testing clinical applications.

The virtual phantom library contains a library of 25 3D anatomical and geometric virtual phantoms, all of which can be extensively edited and exported as DICOM-3 images, to create uniquely customisable phantoms which offer an infinite range of testing potential. All virtual phantoms can be transformed, deformed, re-orientated, structure density changed etc, to create DICOM-3 series in CT, simulated MR and PET which are then exported to the test application. DICOM headers can be edited. Parameters such as slice spacing and FOV can be modified in the exported DICOM-3 series.

DICOM-3 images of any modality can be imported, edited and exported as new DICOM series. Supported modalities include CT, MR, PET, MVCT and cone beam CT. RT Structure Sets can be imported, and edited prior to export. A selection of noise patterns can be added to images.
DICOM images can be globally translated, rotated, and re-scaled under controlled conditions to assist with systematic validation of clinical systems.
More extensive deformations can be applied using the ImSimQAdform module.

For image registration testing, varying setups of an initial DICOM image series can be created, without having to use valuable scanner time to create multiple scans for testing. Initial high-resolution images e.g. 1mm slice spacing can be resampled to 2,3,5mm etc and exported to test the effect of slice resolution. RT Structure outlines can be edited, and structure densities can be allocated a new density prior to export – to test the effect of density differences on image registration accuracy.

Editing DICOM images imported into ImSimQA is a powerful way of creating an infinite range of new test scenarios, without needing to re-scan or source patient images, yet apply systematic changes in a scientific and methodical fashion.

Any DICOM-3 image modalities such as CT, MR, PET, and radiation therapy images such as MVCT and CBCT, can be imported and extensively edited.

DICOM header and image acquisition parameters such as name, UID, slice and FOV resolution can be edited and new parameters saved for export.

An imported CT series with associated RT Structures can easily be edited to change the density of a contoured structure such as the bladder. A user-defined Hounsfield value can be assigned and the newly created images exported for testing. An example of this would be to apply a density for contrast media to the bladder in an IGRT-CBCT or planning CT image series, to test how image registration and fusion software performs with varying densities.

ImSimQA provides a toolkit of 15 virtual phantoms that can be extensively edited and transformed, before being converted to DICOM CT, MR & PET simulated images. With the ability to add noise, change density, change slice spacing and re-orientate, the phantom DICOM images are then exported to the test application, minimising the use of the real scanner, and increasing the efficiency of testing. Real DICOM images can also be imported into ImSimQA for editing, without having to continually re-scan.

mSimQAdform allows users to implement the requirements of the AAPM Task Group 132 report on the ‘Image Registration and Fusion Algorithms and Techniques in Radiotherapy’. The user can create deformed changes to virtual or real image structures. Deformations can be local or global and applied to any user-defined anatomy or object. Once deformations have been applied, static or 4D image series of CT/MR/PET can be created and exported to a 3rd party system for testing of, for example, image fusion software. Examples could include CT-CBCT IGRT image matching assessing daily anatomy changes; CT-MR image fusion of pre and post-operative images; image fusion of MR images on curved couches – CT image on flat couch tops.

ImSimQAdform users also have access to an additional library of 10 original and deformed synthetic head and neck phantoms created where the deformed dataset is based on actual anatomical changes seen during the radiotherapy treatment course. From these, a ground truth deformable vector field (DVF) was created for each phantom. This allows the phantoms to be used to assess the accuracy and precision of the DIR algorithm in any available system, with clinically relevant data. This was developed through work with clinical partners.

Comparisons can be made in 4 ways:

Access to scanners for obtaining test images, either of phantoms or patients, can be challenging due to high clinical demand. ImSimQA can import DICOM-3 image series of any imaging modality, plus import DICOM RT Structure sets associate typically with CT data.

Oncology Systems Limited’s ImSimQA can further re-import the generated images from an image registration or auto-contouring application, and perform quantitative testing on the resulting images, to report and analyse the goodness of matching, and visually highlight areas of mismatch.

Virtual markers can be inserted into any modality image, mapped to a new location, and a local or global deformation applied. New realistic clinical scenarios can be created to produce new images that can be exported to test rigid and deformable image registration, auto-contouring, auto-margining algorithms plus a wide range of medical and oncology imaging systems that reconstruct images or handle image data generated at different points in time when a patient’s anatomy would have changed. 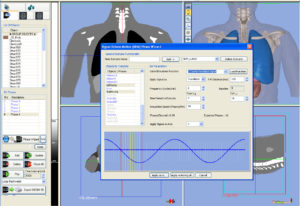 Qualitative visualisation and quantifiable metrics are reported and presented for fast and efficient analysis. 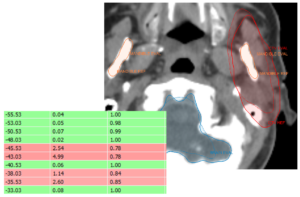 Typically, this module is suited to testing atlas-based automatic segmentation performance, general RTP automatic contouring software, to compare operator contouring performance against a gold standard and inter-operator variability. A range of metrics are included such as Conformity Index, Mean Distance to Conformity and Centre of Gravity, all of which provide results of precisely where and by how much contours vary.